During the second half of 2018, the Southeast Asian region was hit with a number of catastrophic events beginning with the dam collapse in Lao and involving several tragedies in Indonesia. The ASEAN Post would like to bring its readers back and revisit key events and happenings throughout the second half of 2018.

Perhaps two of the most memorable things to have happened in July in the region was Cambodia’s election and the Lao dam collapse.

Cambodia’s election took place on July 29 but with the absence of a credible opposition, the election was viewed as merely a formality, and dismissed as a "sham election" by the international community. It resulted in a widely expected landslide victory for the ruling Cambodian People's Party (CPP), who won all 125 seats in the National Assembly. Cambodia's Prime Minister Hun Sen casts his vote during the general elections at a polling station in Phnom Penh on July 29, 2018, as his wife Bun Rany watches. (Manan Vatsyayana / AFP)

Various international governments including Australia, Canada, the European Union, and the United States dismissed the election results, and threatened to impose sanctions on Hun Sen's government. China, the Philippines, Laos and Thailand were among the countries to congratulate the CPP on their victory. A couple carry their children from their home in the flooded area in Sanamxai, Attapeu province. (Kao Nguyen / AFP)

The dam collapse lead to widespread destruction and homelessness among the local population in neighbouring Attapeu Province. As of 25 September, 40 people were confirmed dead, at least 98 more or as many as 1,100 more people went missing, and 6,600 others were displaced.

The following month was the month of the 2018 Asian Games, officially known as the 18th Asian Games. The Games were held from 18 August to 2 September in the Indonesian cities of Jakarta and Palembang and was the first time it was co-hosted in two cities. Events were held in and around the two cities, including venues in Bandung and some places in the provinces of West Java and Banten. It was also the first Asian Games where eSports and canoe polo were contested as demonstration sports.

China led the medal tally for the tenth consecutive time. North Korea and South Korea marched under the Korean Unification Flag at the opening ceremony and competed as a unified team for the first time in some events. They also won one – and their first - gold medal as a unified team. Japanese swimmer Rikako Ikee was announced as the most valuable player (MVP) of the Games. There were 6 world, 18 Asian and 86 Asian Games records broken during the Games. 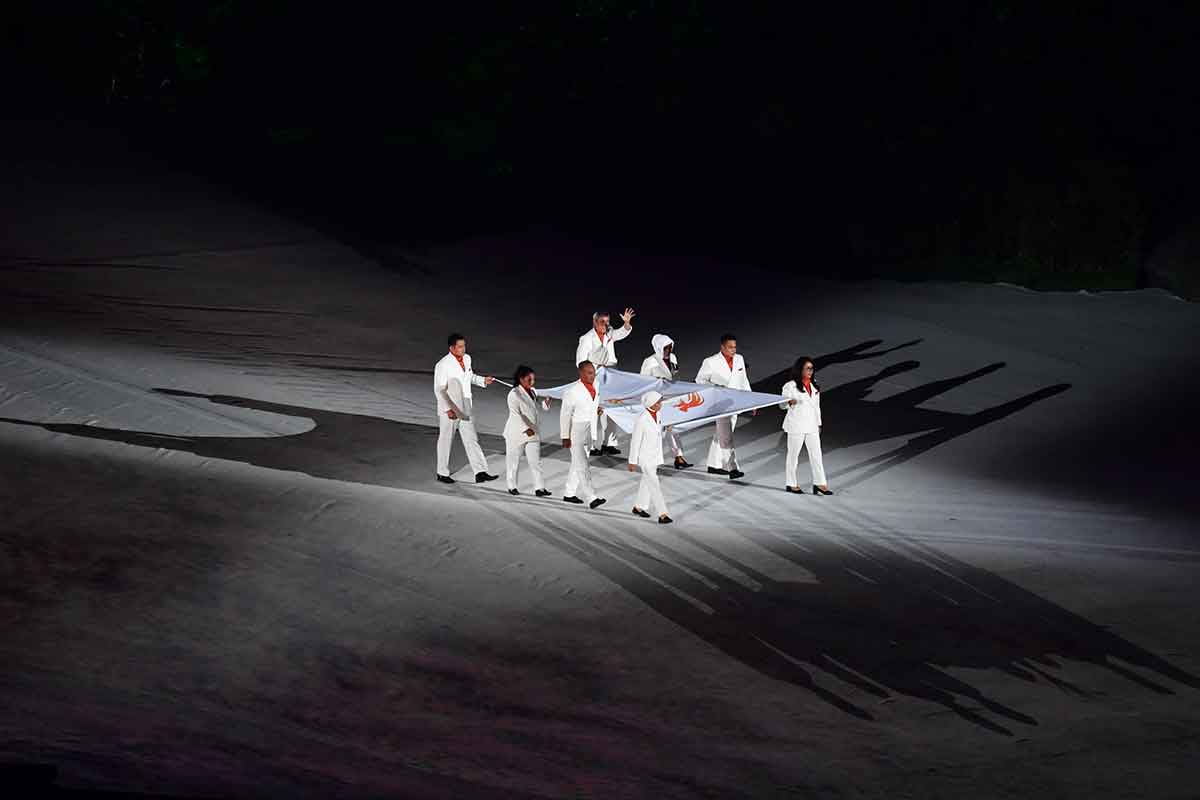 Former Indonesian athletes carry the Olympic Council of Asia flag during the opening ceremony of the 2018 Asian Games at the Gelora Bung Karno main stadium in Jakarta on August 18, 2018. (Adek Berry / AFP)

Indonesia started with less time than most host countries after it agreed to hold the Games when Vietnam pulled out. However, officials assured that they were ready to take the Games in their stride.

In a bid to safeguard the event, some 40,000 troops and police officers were deployed in Jakarta and Palembang. Indonesia suffered its deadliest terror attack in more than 10 years in May when suicide bombers killed 13 people in Surabaya, the nation's second-biggest city. Police said they had been rounding up terror suspects and petty criminals in a pre-Games crackdown.

Tragedy struck the region yet again in September when Indonesia was hit with a magnitude 7.5 earthquake struck in the neck of the Minahasa Peninsula with its epicentre located in the mountainous Doggala Receny, Central Sulawesi. The quake was located 77 km away from the provincial capital Palu and was felt as far away as Samarinda on East Kalimantan and also in Tawau, Malaysia. This event was preceded by a sequence of foreshocks, the largest of which was a magnitude 6.1 tremor that occurred earlier that day.

Following the mainshock, a tsunami alert was issued for the nearby Makassar Strait, but was called off half an hour later. A localised tsunami struck Palu, sweeping shore-lying houses and buildings on its way. A man looks for belongings from his house after it was damaged in Palu in Central Sulawesi on September 29, 2018, following a strong earthquake and tsunami that struck the area. (Bay Ismoyo / AFP)

But Indonesia’s sorrows were far from over. On 29 October, the country saw its second deadliest airplane accident, only below 1997’s Garuda Indonesia Flight 152 which saw all 234 passengers and crew were killed.

Lion Air Flight 610 was a scheduled domestic flight operated by the Indonesian airline Lion Air from Soekarno–Hatta International Airport in Jakarta to Depati Amir Airport in Pangkal Pinang that crashed 13 minutes after takeoff. Wreckage from the Boeing 737 MAX 8 aircraft was found in the Java Sea, off the coast of Java. All 189 passengers and crew were killed in the accident. Next of kin attempt to identify personal items of loved ones who were on board the ill-fated Lion Air flight JT 610, at a port in Jakarta. (Bay Ismoyo / AFP)

Indonesian authorities said that the jet should have been grounded over a recurrent technical problem before its fatal journey, adding that details from the new jet's flight data recorder suggested that pilots struggled to control its anti-stalling system.

The preliminary crash report from Indonesia's transport safety agency also took aim at the budget carrier's poor safety culture, but did not pinpoint a cause of the October 29 accident.

The second ASEAN summit of the year, which was held between 11 November to 15 November in Singapore, was a “star-studded affair” compared to the earlier one held in April. This summit saw leaders of all 10 ASEAN member states and leaders of key partner nations from outside the region including United States (US) Vice President Mike Pence, Russian President Vladimir Putin, Chinese Premier Li Keqiang and many more.

The attendance of global leaders signalled that ASEAN is no longer just a backwater region at the periphery of Asia, but that the region plays an important role in shaping the future of global politics and trade. ASEAN’s leaders pose for a group photo before the start of the ASEAN-China summit on the sidelines of the 33rd Association of Southeast Asian Nations (ASEAN) summit in Singapore on November 14, 2018. (Lillian Suwanrumpha / AFP)

Among the key side-events at the summit were the various ASEAN and key partners meetings. In the ASEAN-China summit, both entities vowed to strengthen efforts to meet the joint target of US$1 trillion in trade volume and US$150 billion in investment by 2020. ASEAN and China also announced a roadmap titled “ASEAN-China Strategic Partnership Vision 2030” in a bid to bolster ties between the two.

Trade was also discussed during the ASEAN-US summit. The US remains an important trading partner of the region, with the country being the third largest trading partner with a two-way trade worth US$235.2 billion in 2017. In a statement released by Lee Hsien Loong after the summit, he noted that ASEAN was looking forward to improve trade between the two in the coming years.

While trade was also discussed individually on the side-lines with other key partners such as South Korea, Japan, and India, all eyes were on the Regional Comprehensive Economic Partnership (RCEP) negotiations which were also carried out at the summit. The RCEP if completed could be the largest trade and investment agreement since the General Agreements on Tariffs and Trade (GATT) as it would encompass 25 percent of global gross domestic product (GDP), 45 percent of the total population, 30 percent of global income and 30 percent global trade.

As if giving Indonesia no room to breath nor showing any mercy, Indonesia was hit yet again with a devastating tsunami struck western Java and southern Sumatra islands during the evening of 22 December. The tsunami was sparked by landslides from an erupting volcano.

More than 430 people have been found dead, about 1,500 injured and almost 22,000 displaced in villages on the Java and Sumatra coasts.

Perhaps one of the more talked about events caused by the tsunami was following a dramatic footage posted online. The video showed fans of Seventeen pop band clapping and cheering before the wave smashed into the concert, hurling band members from the stage and slamming into the audience. According to reports, out of the band members, only the vocalist survived. Remnants of tentage in which the Seventeen pop band was playing when the tsunami, caused by activity at a volcano known as the "child" of Krakatoa, hit is seen at the Tanjung Lesung Beach resort in Tanjung Lesung, Banten province. (Adek Berry / AFP)

Those were among the major happenings in the Southeast Asian region throughout the second half of the year. Here's to hoping that 2019 brings with it more reason for ASEAN to celebrate and that the worst of 2018 stays behind us. Happy New Year from all of us at The ASEAN Post!