Money is one of the greatest enemies of democracy. This especially rings true in Indonesia which will soon see one of its biggest elections ever this Wednesday.

Last month, Indonesia’s Corruption Eradication Commission (KPK) arrested Bowo Sidik Pangarso, a member of the House of Representatives (DPR) in the alleged bribe case of the cooperation between PT Pupuk Indonesia Logistik and PT Humpuss Transportasi Kimia. The commission discovered that he had boxes stuffed with envelopes containing low-denomination notes totalling about eight billion rupiah (US$70,647).

The KPK suspects the cash was put aside for what is termed a “Dawn Attack” – a widespread ploy in Southeast Asia where people are given cash early on voting day in hopes that it would sway their votes.

Buying votes is a crime according to Indonesia’s Election Law 2017 and those who violate this law could face a maximum penalty consisting of a 48 million rupiah (US$3,329) fine and four years in jail. This, however, has apparently not stopped the practice in Indonesia.

According to research conducted by Burhanuddin Muhtadi, a lecturer from Universitas Islam Negeri Syarif Hidayatullah Jakarta, buying votes is nothing new in Indonesia. In fact, his research - which analysed data from multiple sources, including surveys with more than 800,000 respondents across the country from 2006 to 2016 – found that Indonesia actually holds third-place on the list of countries with the most vote-buying practices.

“Knowing that vote buying is regarded unfavourably in Indonesia, I expected my respondents would mostly lie about it for fear of being punished or excluded socially. Based on this assumption, I created an experimental survey designed to encourage voters to give honest answers. Unlike regular surveys, my survey involves a set of disguised questions that do not deter respondents from telling the truth,” he wrote.

Using a dataset compiled after the 2014 legislative election, he found that vote-buying practices involved of up to 33 percent of voters.

“This means that, of 187 million registered voters in the 2014 election, up to 62 million were the targets of vote buying. This figure would make Indonesia the country with the third-largest vote-buying practice, after Uganda and Benin.” 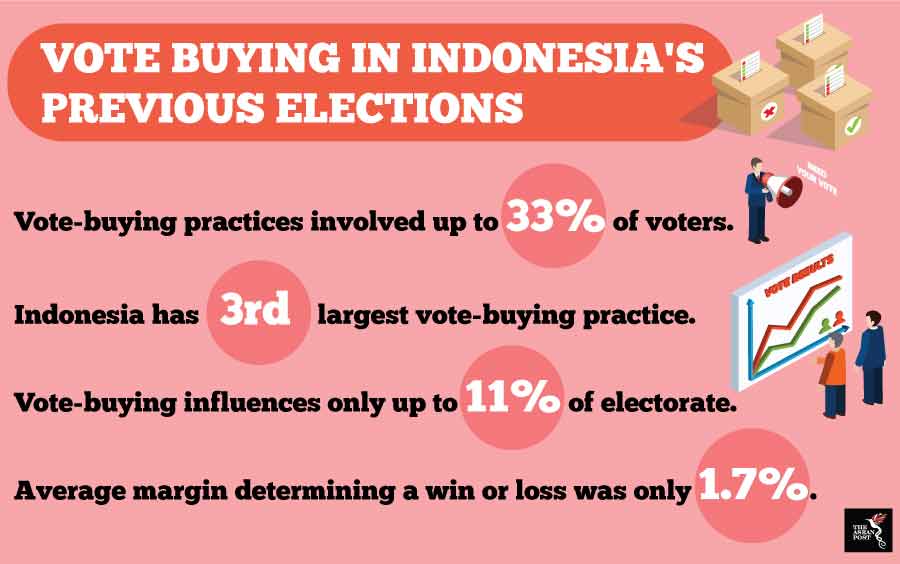 According to Burhanuddin, the practice of vote buying began to flourish in the 2009 election, after the Indonesian government allowed candidates to enter the political race. The fact that each candidate not only competes with candidates from other parties but also with other candidates from his or her own party has exacerbated the practice.

But vote buying continues today. Burhanuddin found that most candidates were relatively open when discussing how much money they distributed to voters and how they engaged in vote-buying operations.

“The practice is so ubiquitous that a famous one-time national parliament member once dared me in an interview to cut his finger off if I could find a legislator who got elected without buying votes,” he said.

Indonesia isn’t the only ASEAN member state with rampant vote-buying. In Thailand, former Finance Minister Korn Chatikavanij from the Thai Democrat Party in 2011 was quoted as saying that vote buying did happen, but was ineffective. Korn noted that in the 2007 election, a number of old Thai Rak Thai Party members of Parliament in the northeast (known to be loyal to the Shinawatra clan) had defected to the then new Puea Paendin party. Thai Rak Thai was founded by Thaksin Shinawatra.

“They outspent the People’s Power Party three to one and still lost,” he said.

The People's Power Party is a defunct Thai political party. The party leader was Somchai Wongsawat, the Party Secretary General was Surapong Suebwonglee, and the Party Spokesperson was Kuthep Saikrajarng. Most members of Parliament from the party originally hailed from the Thai Rak Thai and the party was in fact a de facto reincarnation with former prime minister Thaksin Shinawatra as its leader.

“What Thaksin did was to make that connection (between himself and the People’s Power Party) and make it directly relevant to his target group (the voters in the Northeast)” Korn added.

In Indonesia, on the surface, vote-buying does not have a large impact. In fact, the practice only influences up to 11 percent of the total electorate. But Indonesia is not Thailand.

While 11 percent may seem like a meagre number, Burhanuddin’s research found that the average margin that determined whether one candidate won or lost an election in Indonesia was only 1.7 percent.

“So, if buying votes can influence up to 11 percent of voters, no wonder many political candidates are still doing it. It may give them a chance to clinch victory,” he said.

In his iconic Gettysburg Address, Abraham Lincoln defined democracy as a government “of the people, by the people, for the people.” It would surely be a shame if money ended up deciding Indonesia’s government on 17 April instead of its people.

No money no vote in Indonesia election

Vote-buying: Worth the money?