An explosive eruption of the restive Taal volcano no longer appears imminent, Philippine authorities said Sunday as they lifted most of a mass evacuation order but warned residents to remain ready to flee.Warning signs such as earthquakes have been steadily waning since Taal burst to life two weeks ago with plumes of ash and lava, forcing over 135,000 people into shelters over fears a massive blast was coming.The nation's seismological agency said steadily shrinking ash and gas emissions Decimated fish, scarred coffee plants and vanished tourists: the Taal volcano eruption in the Philippines has inflicted significant damage on the livelihoods of tens of thousands and is expected to cause more.When Taal exploded to life last Sunday it spewed towering columns of fine grey ash, which officials said destroyed crops and killed off potentially tonnes of fish raised in the lake that rings the volcano."We lost a lot of money because all our fish are gone," said Cesario Rodr 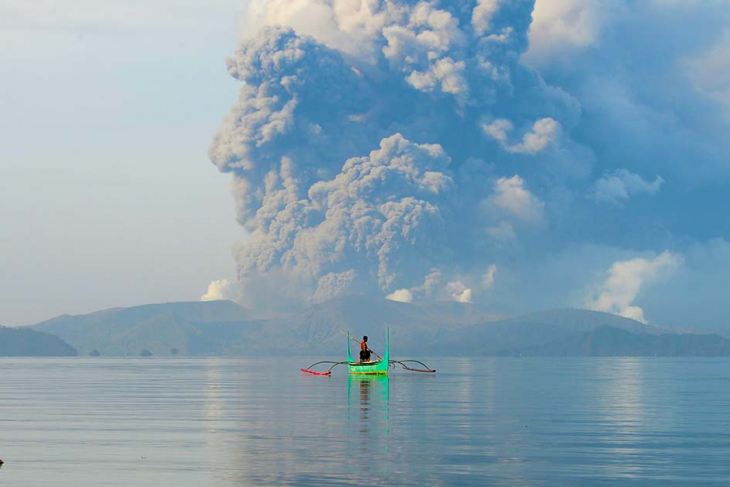 The eruption of a volcano near the Philippine capital has delivered a dazzling but highly dangerous spectacle since it began spewing superheated steam on Sunday.The Taal volcano's bursts of lightning and monster clouds of ash have drawn crowds of gaping observers, but also prompted thousands to flee from its fury.Here are five facts about the mix of beauty and terror that volcanoes produce:&nbsp;Lightning&nbsp;Large eruptions sometimes put on a stunning display of lightning strik

The Philippines was on alert Monday for the "explosive eruption" of a volcano south of Manila, which officials said could be imminent after a massive column of ash forced a halt to flights at the capital's main airport. Tales of heroism, devastation and horrifying injuries emerged Tuesday after New Zealand's smouldering White Island volcano exploded, killing an estimated 14 people and turning what should have been an intrepid day trip into a nightmare.The number of confirmed fatalities rose to six Tuesday night after an injured person died in an Auckland hospital, police said.Eight more people were presumed dead after Monday's eruption, while dozens of others injured were being treated in hospital