As ordinary Malaysians struggle to make ends meet as a result of the COVID-19 pandemic, the number of empty shop lots continue to grow all over the capital city of Kuala Lumpur displaying signs that say “available for rent”.

With the growing importance of food self-sufficiency, now is the time for Malaysia to turn empty spaces into urban farms – tackling food security related issues besides making good use of the existing space.

Urban farming is the practice of cultivating, processing and distributing food in or around urban areas.

Although Malaysia is rich in natural resources, the country is highly dependent on high-value imported foods. Presently, its self-sufficiency levels (SSL) for fruits, vegetables and meat products stands at 78.4 percent, 44.6 percent and 22.9 percent, respectively.

With a lower occupancy rate in both, retail and office space, property developers in the country could probably redevelop these buildings for another usage – urban or vertical farming as done by Singapore with tremendous success.

According to the National Property Information Centre (NAPIC), the occupancy rate for shopping malls in Malaysia has dropped consecutively for five years. It declined from 79.2 percent in 2019 to 77.5 percent in 2020, the lowest since 2003.

In addition, the Valuation and Property Services Department (JPPH) revealed a lower occupancy rate for Malaysia’s privately-owned office buildings compared to during the pre-pandemic era.

Aquaponics, the pesticide-free farming system that combines aquaculture (i.e., growing fish) and hydroponics (i.e., growing plants without soil), could be the way forward to redevelop the many empty shop lots and office buildings in the country.

Aquaponics is a soilless farming technique that allows fish to do most of the work by eating and producing waste. The beneficial bacteria in the water will convert waste into nutrient-rich water and fed to the soil-less plants.

The following are steps for vertical aquaponic farming:

1. Small growth cups are filled with coco peat, which are then sterilised under ultraviolet (UV) light, preventing bacteria and viruses from entering into the water pumps. There is an additional control over the environment with regards to temperature and daylight through the use of LED growth lights.

2. A hole is poked in the middle of the cup, where a plant seed is placed inside. The use of non-genetically modified organism seeds imported from reliable sources is very much encouraged.

3. The seed is germinated for one to three days in a room.

4. Once the seed has germinated and grown to about two centimetres (cm), the pots can be placed in the vertical harvest tower.

5. Nutrient-filled water from the fish pond flows to the plants automatically. Big plants grow within 30 days.

While enabling the growth of many varieties of vegetables with indoor temperature conditions, aquaponics could also generate fish production – sustaining economic livelihoods, particularly for the underprivileged and disabled communities, as well as fresh graduates who are struggling to secure a decent job.

The Sunway FutureX Farm, Kebun-Kebun Bangsar (KKB) and Urban Hijau, for instance, are good urban farming initiatives in the city centre of Kuala Lumpur. However, there are still many potential sites that could be transformed into urban farms.

As it only requires a quarter of the size of a traditional farm to produce the same quantity of vegetables, the vertical rooftop system would yield more than four times compared to conventional farming. At the same time, it also reduces the need to clear land for agricultural use while avoiding price fluctuation.

Besides reducing over-reliance on imports and cutting carbon emissions, indoor vertical farming within the existing building also allows local food production as part of the supply chain. The owners of these farms can also conduct workshops and demos as well as offer guided and educational tours that promote the joy of urban farming.

With urban farming structures inside a building, stressed-out office workers and the elderly, in particular, could enjoy a good indoor environment, air quality and well-ventilated indoor spaces. They could also relax their minds through gardening and walking around the urban farms.

To increase the portion of food supplied locally, the government needs to empower farmers and relevant stakeholders, incentivise the private sector to embark on urban farming, and provide other forms of support through facilitating, brokering and investing.

This, in turn, would enhance the supply and affordability of a wide range of minimally processed plant-based foods, as suggested under the latest Malaysia Economic Monitor “Sowing the Seeds” report by the World Bank.

The current involvement of youth in the agriculture sector accounts for only 240,000 or 15 percent of the total number of farmers in Malaysia as noted by Deputy Minister of Agriculture and Food Industries (MAFI) I, Ahmad Hamzah.

MAFI, the Ministry of Entrepreneur Development and Cooperatives (MEDAC) and the Ministry of Youth and Sports (MYS) have to craft training programmes and develop grant initiatives together in order to attract more youth to become agropreneurs involved in urban farming.

These ministries can also work with the Department of Agriculture (DOA), the Malaysian Agricultural Research and Development Institute (MARDI) and the Federal Agricultural Marketing Authority (FAMA) to develop more comprehensive urban farming initiatives.

While providing job opportunities for youths, young agropreneurs who embark on urban farming could enjoy higher income and productivity and yields, on top of increasing the contribution of agriculture to Malaysia’s gross domestic product (GDP).

For urban farming to thrive in Malaysia, the government perhaps could adopt and adapt the Singapore government’s approach of developing specific targets to encourage local food production. Even though Singapore has limited resources, the island state is still setting an ambitious target of increasing the portion of food supplied locally to 30 percent by 2030.

The upcoming 12th Malaysia Plan (12MP) would also provide timely opportunities for the government to turn empty spaces into urban farming in the context of the ongoing impact of the COVID-19 pandemic besides fostering agricultural modernisation by leveraging on Industrial Revolution 4.0.

In a nutshell, every Malaysian can do their part to help the country become more food resilient. Urban farms will encourage people to buy more local produce at affordable prices while reducing greenhouse gas (GHG) emissions at the same time.

Farming In The City 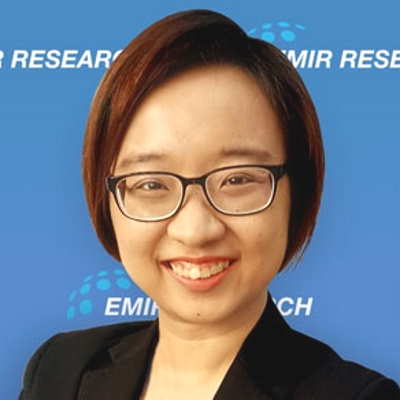 Amanda Yeo Yan Yin is a Research Analyst at EMIR Research. Prior to researching on socio-economic issues in Malaysia, she served as Private Secretary to both, the Minister of Youth and Sports of Sabah and the Minister of Health and People's Well-Being of Sabah.