The traffic situation in Southeast Asia is famous for all the wrong reasons. Although some countries have taken steps to minimise congestion such as Vietnam’s ban on motorcycles by 2030, and Singapore’s deployment of road tolls and an expensive certificate of entitlement to reduce the number of car ownerships, the traffic situation in the region could still use some help.

Tech companies and developers are constantly looking for opportunities to come up with further solutions that will help governments and motorists. The use of artificial intelligence (AI) and cloud computing have been making waves as newer technology reaches the region’s shores. This has led to more companies looking towards these technologies for solutions to help ease traffic woes.

Last January, Malaysia became the first country outside China to adopt Alibaba's City Brain solution – a traffic management system that uses big data, AI and cloud computing to help cities manage their urban transportation needs. The system was first implemented in Hangzhou, where Alibaba’s headquarters is located. Operational since late 2016, there has been a 15 percent decrease in traffic congestion in the Chinese city.

How does it work?

With the use of cloud computing, AI and data processing capabilities, the flow of vehicles and traffic signals can be optimised by calculating the time vehicles take to reach intersections. It is also able to generate structured summaries of data, such as traffic volume and speed in particular lanes, which can be used to facilitate other tasks including incident or accident detection.

In addition, programmes such as the City Brain will be able to connect with various urban management systems including emergency dispatch, ambulance calls, traffic commands, and traffic light control. By integrating and analysing real-time data generated from these systems, urban traffic flows can be optimised for emergency vehicles. For example, the quickest routes can be identified so that ambulances can arrive at a specific location within the shortest time frame possible.

Apart from managing traffic, cloud computing with the aid of AI is also realising the vision of driverless cars for the region. According to Alibaba Cloud president Simon Hu last September, Kuala Lumpur was making “good progress in traffic management”. Local planners said there are plans for the project to be implemented in other parts of Malaysia.

Research organisation McKinsey Global Institute stated in a report that tools such as City Brain can help reduce fatalities by eight to 10 percent, accelerate emergency response times by 20 to 35 percent and shave average commute times by 15 to 20 percent.

The abovementioned report titled ‘Smart cities: Digital solutions for a more liveable future’ was published in June 2018 and was based on a study that assessed how dozens of current smart city applications could perform in three sample cities with varying legacy infrastructure systems and baseline starting points. It found that such tools could cut greenhouse gas (GHG) emissions by up to 10 or 15 percent. 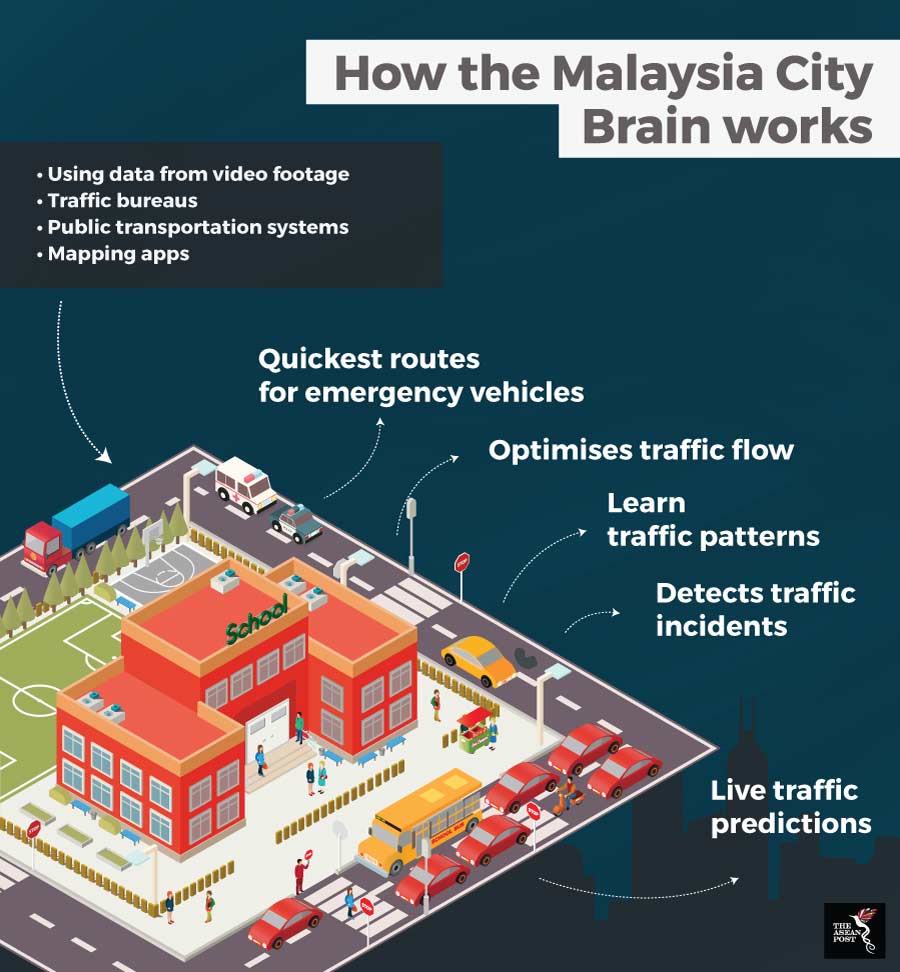 Implementation in other countries

Malaysia’s implementation of City Brain is indeed a significant milestone as it gives hope for other countries in Southeast Asia grappling with horrific traffic conditions such as Indonesia and the Philippines.

Jakarta was ranked as the third most congested city in the world after Mexico City and Bangkok last year, and the Indonesian capital has more than 13 million motorcycles and 4.4 million cars on its roads. It is estimated that more than 2.1 million trips are made from the outskirts of Jakarta into the city daily.

In Manila, a hub of 13 million people, traffic cost the city nearly US$70 million in economic activity in 2017, according to the Japan International Cooperation Agency. The Philippine government embarked on a US$180 billion program to modernise its aging transport infrastructure last month, although the fruits of that labour will not be enjoyed for many years to come.

These two cities, which traditionally have recorded the highest traffic throughout the region, could also look into employing technology like cloud computing and AI to ease their traffic woes. Should other countries in the region follow suit in implementing these systems, the prospect for Southeast Asia becoming a leader in the smart city space will be bright and promising.

This article was first published by The ASEAN Post on 3 March 2018 and has been updated to reflect the latest data.

Cloud computing services race heating up in the region