Five moon bears were rescued in August last year from a bile farm near the city of My Tho, located 70 kilometres from Ho Chi Minh City in South Vietnam. The bears, likely captured from the wild, were rescued by the Animals Asia Foundation. They were found confined in barren concrete cells, displaying signs of severe stress after having been in captivity for more than 20 years. The bears were found with a plethora of medical issues arising from decades of abuse and neglect, including arthritis, cataracts and tooth decay.

Vietnam is a source, consumer, and transit country in the trading of two globally-threatened bear species, the Sun Bear (Helarctos malayanus) and Asiatic Black Bear (Ursus thibetanus). At the peak of the Vietnamese bile farming industry in 2005, it is estimated that more than 4,500 bears were living in captivity on private farms. The current estimate puts the number of bears in captivity at around 800.

Bear bile extraction was made illegal in Vietnam in 2005, but bear farms were allowed to keep the bears they already had. A 2016 survey by wildlife trade monitoring network TRAFFIC, however, found that around 40 percent of traditional medicine outlets and bear farms surveyed were selling or admitted to selling bear bile products in violation of Vietnam’s wildlife protection laws.

Bile farming often involves the cruel practice of keeping bears in tiny cages, while their gallbladders are regularly pierced with steel or perspex catheters through their abdomens to enable bile harvesting. Some bears are also forced to suffer catheters that are permanently left in their abdomens. Bears are the only animals known to produce significantly large amounts of ursodeoxycholic acid (UDCA, also known as “ursodiol”) in their bile, an active pharmaceutical compound effective in treating a variety of ailments.

Although UDCA can also be manufactured synthetically, most traditional medicine enthusiasts prefer naturally produced bile. Enthusiasts also prefer bile harvested from wild bears as opposed to farmed bears. This is due to the perception that farmed bear bile is of lower quality due to the high rate of extraction and poor nutrition. Raw farmed bear bile prices in Vietnam have dropped from a high of US$10 per millilitre (ml) in 2005, to around US$5/ml in 2010, and a further reduction to US$2/ml in 2018. Wild bear bile on the other hand can fetch prices up to 12 times the price of farmed bear bile. 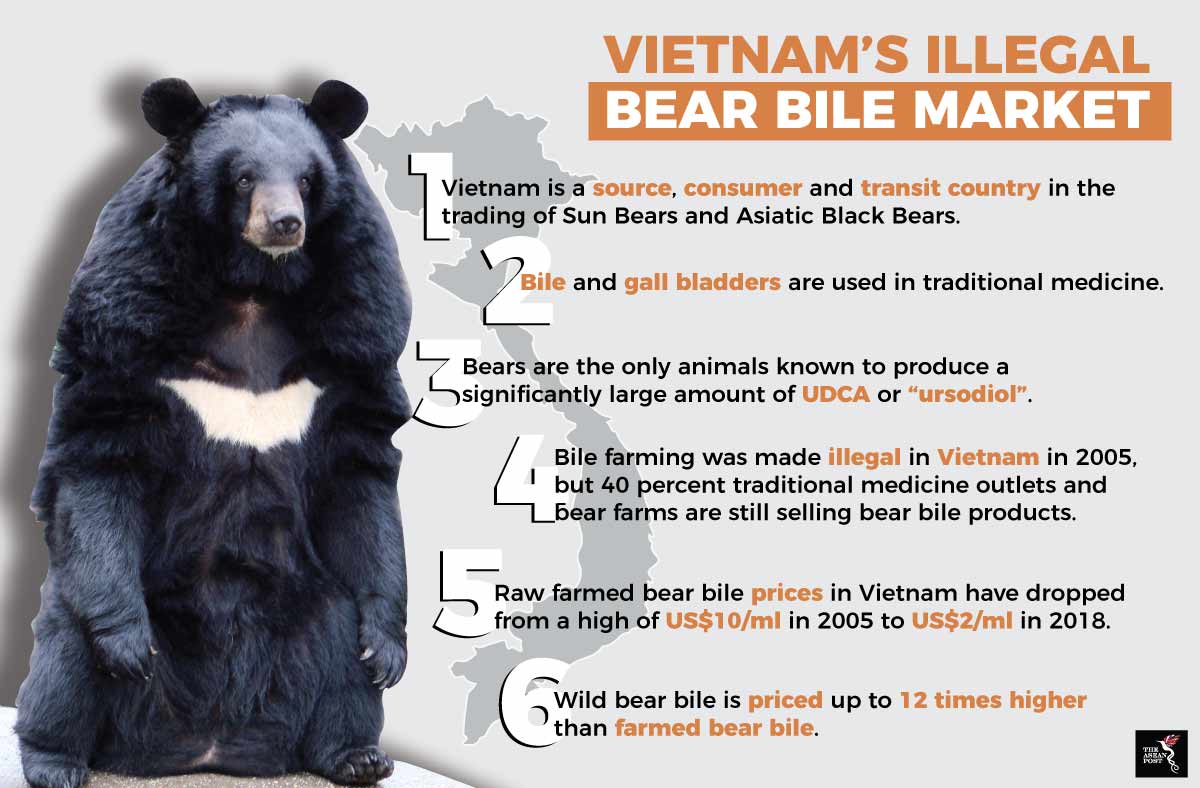 The declining farmed bear bile price, coupled with the 2017 landmark decision by the Vietnamese government declaring a zero-bear farm target by 2022, could translate into a potential death sentence for the remaining 800 bears in captivity there. According to TRAFFIC’s 2016 report on trade assessment of bear bile and gall bladders in Vietnam, trade data, consumer demand perceptions and the declining number of bears in captivity indicated that bear bile farming is unlikely to be profitable and is in decline as an industry. This declining trend preceded a decline in the quality of care for the bears in captivity, with farmers reducing food and care costs to balance their dwindling incomes.

“In support of the evidence collected during this investigation, the Vietnamese media are reporting that bears in farms are being deliberately neglected or killed off, and their body parts then sold on,” the report stated.

The race is now on for the government, animal rights and bear rescue activists, and the public to rescue these bears. This hope is kept alive by the tireless work of governmental wildlife protection organisations, as well as organisations such as the Animals Asia Foundation and Education for Nature Vietnam (ENV) whose letter-writing campaign asking farmers around the country to give up their bears triggered the rescue of five bears in My Tho. To date, more than 600 bears from bile farms in Vietnam and China have been rescued.

The five bears mentioned have now joined 170 other thriving rescued bears currently living out the rest of their lives in the Animal Asia Foundation’s bear sanctuary in Tam Dao in North Vietnam, about 1,700 kilometres away from the bile farm. It is hoped that the rest of the 800 bears will be joining them in safety soon.

A sad end for ASEAN’s tigers