“This is no longer an apology, but a threat.” That was what Chaturon Chaisang, a leader of the now-defunct Thai Raksa Chart Party, wrote online in response to a statement Thailand Prime Minister Prayut Chan-o-cha released earlier this week.

In a letter released to the media on Monday, Prayut apologised for an ongoing fight among coalition parties to secure key cabinet posts. In that same letter, Prayut warned politicians not to force him to resort to “the old method that no one wants to see happen”. The anti-junta faction did not take that very kindly.

“This threat cannot be interpreted as anything other than a reference to the military coup that he performed five years ago,” said Chaturon.

“Is he threatening the people that he will order the armed forces to seize power if he cannot endure the political unrest?” asked Pheu Thai spokeswoman Sunisa Lertpakawat, adding that his words were “unconstructive and illegal, because they can be seen as preparation for an insurrection.”

Prayut, however, has shrugged off the remark he made. When asked to explain his message at Government House on Tuesday, he replied, “There’s nothing,” before walking past the crowd of reporters.

This is not the first time a member of the Thai military made it seem as though a future coup was a possibility. In October, the media went wild after new army chief Apirat Kongsompong refused to commit to not staging another military coup when asked by a reporter how he would handle another political crisis such as that which caused the 2014 coup and subsequently brought the junta to power.

“I am confident that if politics does not cause a riot, there won’t be any. Thailand has had more than 10 coups, but it’s no longer like in the past, because the recent ones occurred due to politics,” he said.

A question that was asked when Apirat spoke of the possibility of another coup, and one that can be reignited now, is this: If the threat of another coup is always in Thailand’s future, then is there truly democracy?

While the country has seen its fair share of elections and Prayut may have won the premiership on the back of a junta-drafted constitution (according to some pundits), the Shinawatra clan has also been known to be long-reigning champions as far as past elections go. That, however, does not ultimately take away from the fact that a coup could happen at any time, as both Apirat and now Prayut have hinted.

With this ever-looming threat, who’s to say that a military coup will not happen merely for the simple fact that the army does not like the next leader?

Max Fisher, an American journalist based in Washington, and columnist in the field of political science and social science, noted in an article back in December 2013 that Thailand has had more coups than any other country.

It isn’t surprising then, that the results of an opinion survey carried out prior to this year’s election by Suan Dusit Rajabhat University, or better known as the Suan Dusit Poll, revealed that most Thais believed that there is a high possibility of political conflicts following the 24 March election. 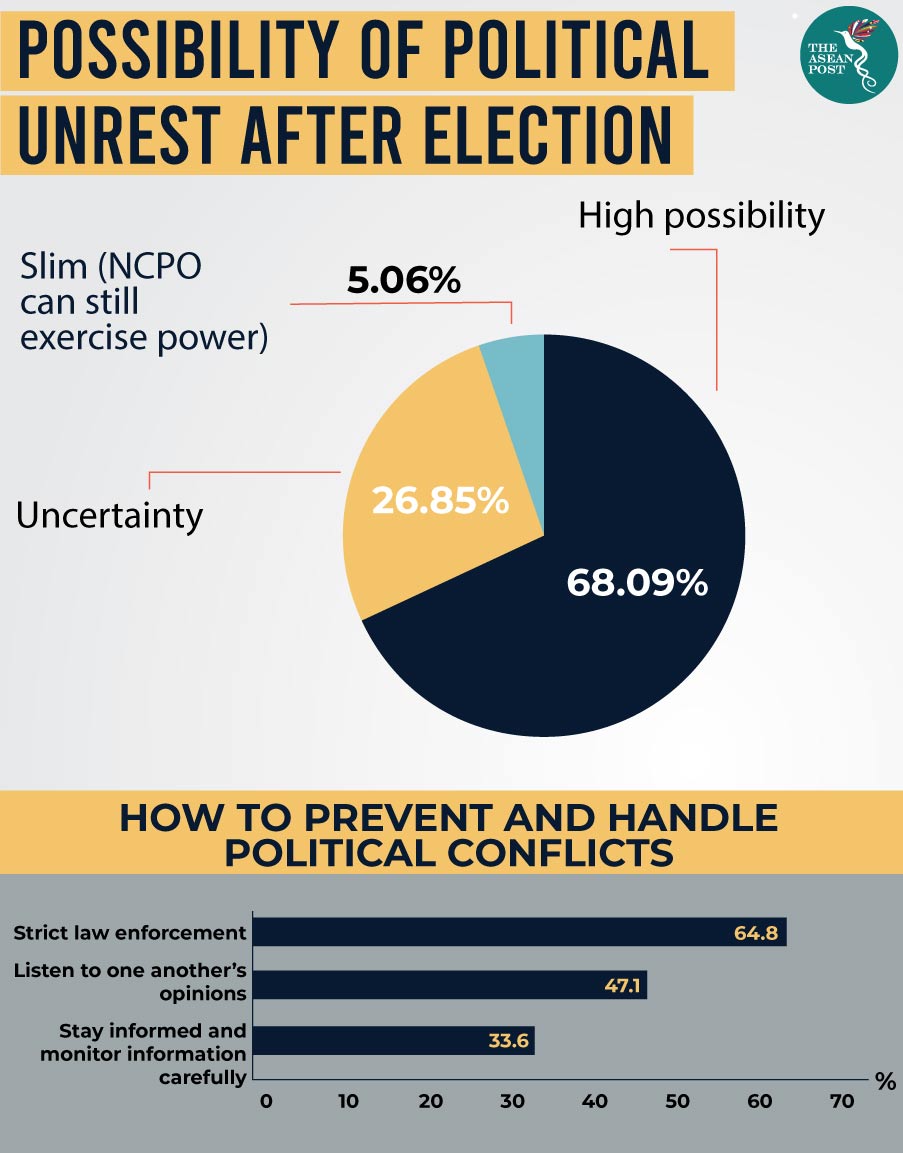 The poll, conducted between 26 February to 2 March, asked Thais whether political conflicts similar to those seen before the takeover of the country’s administration by the National Council for Peace and Order (NCPO) are likely to return without effective preventive measures in place. 68.1 percent of respondents said the possibility was high; 26.9 percent were uncertain, saying that this would depend on the ability of the new prime minister in handling the situation; while 5.1 percent said the chance of political unrest returning was slim, as the NCPO still has abundant power under Section 44 of the interim constitution.

There are three key takeaways from the Suan Dusit Poll. The first, as mentioned, is that the majority of Thais foresee more political conflicts in the future. The second is that 59.2 percent of respondents blamed power struggles and special interests as the root cause of the political conflicts. The third is that 64.8 percent cited strict law enforcement as a means to avoid political conflict.

Summarised, the poll shows that the majority of Thais believe that political conflict is likely to occur, and that a strong-willed, stern leader who puts peace before personal political gain is what will avert it. Looking at the prime ministerial candidates that different Thai political parties had to offer, Prayut was most likely to fit this bill. Considering Prayut’s strong affiliation with the army, he also seemed to be the safest bet if the country wants to avoid another coup.

Today, however, Prayut himself has made a thinly-veiled threat that a coup could become a possibility. “The old method that no one wants to see happen”, as he called it. Have Thais made a mistake thinking that Prayut will help shield them from another coup?