Why Are Thais Criticising Their Monarchy Now?

After a long silence, Thailand’s pro-democracy opposition has returned. Although not clad in red nor do they share allegiances to ousted former Prime Minister Thaksin Shinawatra, they have taken aim at Thailand’s ruling power structures. Thai students held rare flashmob protests on Wednesday as anger at the dissolution of a stridently anti-military opposition party bubbles in a kingdom with a long history of raucous street politics.Universities across the country have seen rallies since the Future Forward Party (FFP) was dissolved last Friday over an alleged illegal loan by its billionaire founder.The party won 6.3 million votes in elections last March, earning the loyalty of millennials with its radical agenda to expunge the A stridently anti-military Thai party was dissolved Friday and its key members banned from politics for a decade over a US$6 million loan by its billionaire founder, a withering blow to the kingdom's pro-democracy movement.The ruling could edge the politically febrile kingdom – whose economy is shrinking – closer to the street protests that have scored much of the last 15 years of Thai history.The Future Forward Party (FFP), fronted by the charismatic auto-parts scion, Thanathorn Juangro A stridently anti-military Thai party survived a first legal attempt to disband it Tuesday over alleged sedition - including links to the Illuminati, a secret group conspiracy theorists say is seeking global domination.The Constitutional Court ruled Future Forward - a pro-democracy party which vehemently opposes the army-aligned establishment - had not shown any intent to overthrow the constitutional monarchy.Dismissing the charge, a judge on the nine-member bench said there was no sign key e Around 10,000 Thais joined the "Run Against Dictatorship" on Sunday, shouting slogans and wielding three-finger salutes from the Hunger Games films in the largest show of political defiance since the 2014 coup.The runners massed before dawn in a Bangkok park to take a stand against the government, which is led by former junta leader Prayut Chan-o-cha and backed by a parliament stacked with MPs loyal to the military.The run was led by Thanathorn Juangroongruangkit, the charismatic bi Tomorrow, most Thais will wait with bated breath as possibly the largest rally since the military coup of 2014 takes place. Last week, news reports in Thailand revealed that as many as 10,000 anti-government opponents had registered for the “Run Against Dictatorship” event organised by the Future Forward Party. The event is set to take place this Sunday in the country’s capital city, Bangkok.Thai pro-government supporters have decided that they would stage a rival walk on the same day. Last week, a survey by Thailand’s National Institute of Development Administration (NIDA) named Thanathorn Juangroongruangkit “the most suitable person” for the post of Thai Prime Minister and his Future Forward Party as the best party to lead the country. Current Prime Minister, Prayut Chan-o-cha came in a distant second spot in the poll.The NIDA Poll was conducted between 18 to 20 December, 2019 and involved 2,511 Thai adults from various occupations and levels of education. 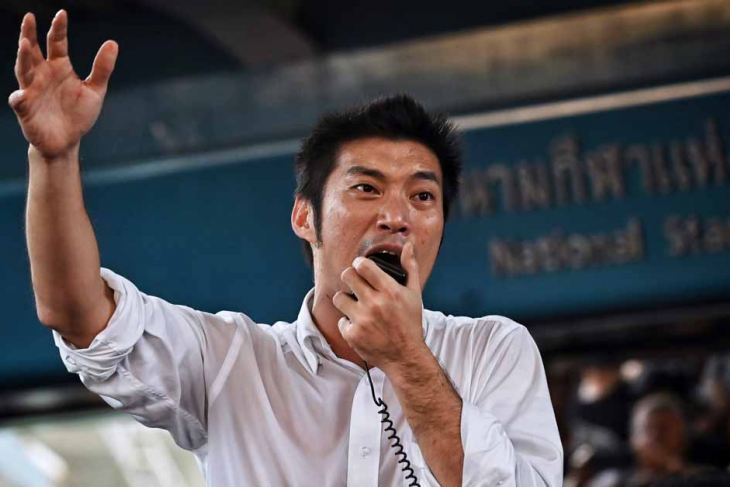 Can Thailand afford another street protest?

Thailand recently witnessed, what is considered by many, to be the largest street protest in more than five years (before the military coup of 2014). Thousands of people gathered on the skywalk linking the National Stadium and Siam Bangkok Mass Transit System (BTS) stations, chanting “Prayut get out” at an anti-military demonstration on Saturday. Heading the protest? Thousands rallied in Bangkok behind the popular leader of an upstart anti-establishment party on Saturday, in the first major protest since March elections returned a junta-aligned government to power.Protesters held signs calling for democracy and flashed a three-finger salute, a rallying symbol used by the Future Forward Party (FFP) that got more than six million votes in the election, thanks to mostly young Thais weary of the military's role in politics.&nbsp;The party's popu The Thai army has filed sedition charges against six key opposition party leaders who debated possible devolution of some powers to the nation's violence-hit south.More than 7,000 people have been killed in 15 years of violence in Thailand's 'Deep South' provinces that border Malaysia.Militants want greater autonomy for the culturally distinct Malay-Muslim region, annexed by Buddhist-majority Thailand more than 100 years ago.But the demand is incendiary to Thai nationalist Thailand's constitutional court on Thursday suspended the wildly popular leader of an anti-junta party from parliament a day before it convenes, putting the brakes on his political career as it agreed to hear a case against him.The dramatic intervention is the latest blow against charismatic billionaire Thanathorn Juangroongruangkit and his youth-oriented Future Forward Party, which stunned the military establishment by securing over six million votes in 24 March elections but has been s